Friday Night Sights: Why Are People from Small Towns So Obsessed with High-School Football? 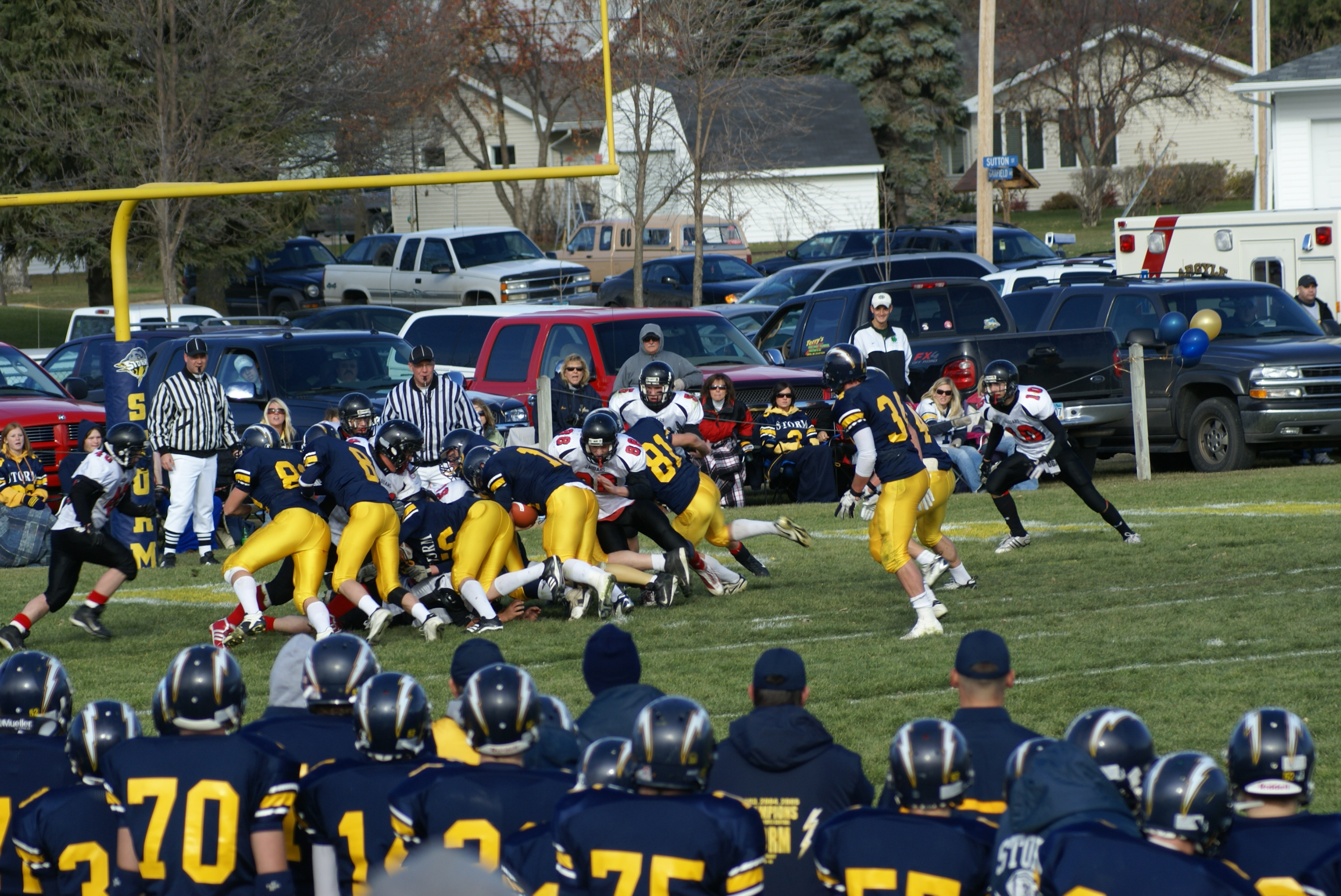 You can’t listen to country radio for long without hearing lyrics about a hometown football game. Football is king in rural areas. It’s a stereotype that holds up, and there are several good, logistical reasons why.

The first reason boils down to arithmetic. Say a town of 1,000 people has a high school with about fifty students per graduating class, meaning about twenty-five boys per class. My hometown is smaller than that, and we averaged about forty-five players on the football team in grades ten through twelve. That’s fifteen boys per class, or about sixty percent of all boys in town, on the varsity football team. If everyone from each player’s family comes to the game, and if each family has one other child besides the player, that’s three family members per player, or 150 people. That equates to twenty percent of the town playing or watching. Throw in grandparents and extended family, and you could easily hit one third, if not half.

Football is unique in this way because it has by far the largest roster of any high-school sport. Basketball rosters are typically twelve to fifteen; soccer, baseball, and hockey have slightly more than that, but are still nowhere near the ninety to one-hundred boys who can be on the sidelines of a football game in a decent-sized town. Further, in addition to having the biggest roster, football actually involves the most players in the game. Unlike, say, basketball, where the same five players play continuously (both offense and defense) and where only about ten players will see the court on any given night, football can have eleven offensive starters, eleven defensive starters, a kicker, a punter, and a whole lot of underclassmen on special teams. You start adding all of this up, and the number of players and their families start to be large portions of the population, even in cities with a few thousand people.

But that’s just the players. Because football has such a short schedule with no more than a handful of home games during a regular season, and because it is played outside during a relatively pleasant time of the year, football games turn into a spectacle in small towns. The pep band often plays, the cheerleaders cheer, and other students are involved with taking stats and running the camera. There’s a student section. Then there’s the crew selling concessions, the ticket-takers, the ambulance, and maybe a police officer or two. You get the idea. In addition to the people who are involved with the spectacle directly, other people go to football games simply because so many of the other people in their social circles are already at the games. As a result, the attendance snowballs. None of this has anything to do with the joy of watching the sport of football, just its infrastructure compared to other sports. In a small town, that adds up.

As the cities get bigger, the rosters stay the same size, and the number of people involved doesn’t increase as rapidly. As a result, the percentage of the city that’s involved in the game, either directly or indirectly, starts to go down.

A friend of mine, also from a small town, used to lament that football and sports generally would attract such crowds, all while the arts were ignored, at least by comparison. For her, this was a commentary on how many small-town people were knuckle-dragging apes. She was excited to move to a bigger city where people were “cultured.”

One sees the point, but there are logistical reasons for this, too. First and foremost, football can be an entertaining sport—literally every play can result in a score for either team. Beyond that, though, football games make for good social events for entire towns because people can, you know, talk to each other. And yell. And move around. And buy snacks. And use the port-a-potty anytime. To boot, the kids can run around. Loudly. Even the best high-school concert or musical can claim none of these traits. If you’re getting a whole town together, these are good elements to your party. The only thing missing is alcohol, but that’s why you go to college. Football games, I mean.

Speaking of college, city people might not get as riled up about high-school sports because there might be other football teams in town, to say nothing of other entertainment options generally. Nearby universities or professional teams inevitably dilute interest in high-school teams, especially by the casual fan. Sure, rural people get excited about professional sports, too, but they are more invested in their high-school teams because there are so few other options for entertainment on Friday nights in the fall. To boot, the football game features people they know. In a small town, the probability of your knowing most of the kids wearing helmets on the field, as well as most of the people wearing mittens in the stands, is quite high.

Are small-town people into football? Sure—it certainly rubs off. But football is king in small towns simply because such a large fraction of the population is involved. The rest of the town is empty. When I was growing up, the joke was that the best time to go on a crime spree in town was Friday night in the fall, right after kickoff. Even the sheriff’s deputy (we were too small for a police department) was at the game.

I suppose that country singers will keep crooning about hometown football games. After all, they’re arguably the cultural center of small-town life. The town’s interest in the game, though, has little to do with what happens on the field. It’s just, quite literally, the only game in town.

photo by P. A. Jensen
SportsData-Driven

Outsiders: The Gender Balance of Housework, Inside and Out