For Fun: The Super-Duper Market (An Ode to Grocery Stores) 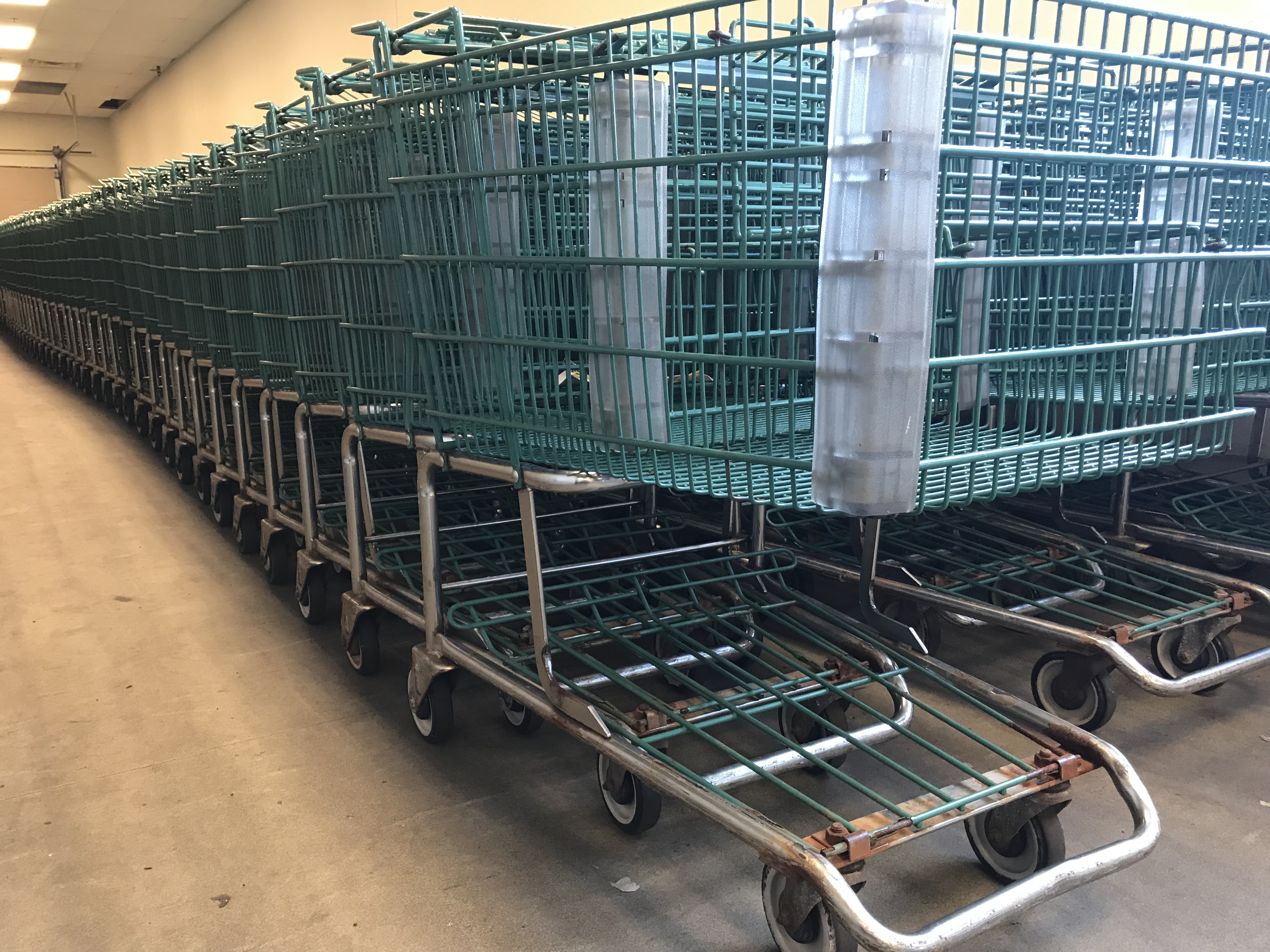 My wife lies to me.

She goes to the supermarket. There’s a difference.

Because my wife grew up in a suburb, she doesn’t know the difference. To suburbanites, the world has only supermarkets: stadium-sized buildings with 200 parking spaces and 400 carts, many of which are strewn across the parking lot. And cart corrals, a dozen of them, holding the carts of the diligent and dutiful who return them. And don’t forget the yellow-clad employees trudging alongside motorized power-carts that push the unmotorized carts back through an industrial-sized garage door, which looks like a long, mechanized, type-A cattle drive from Brave New World.

Inside, a million fluorescent lights are in perfect, beaming rows, high above the aisles, making a kind of celestial glow from stratus clouds of white steel trusses. St. Peter is probably perched somewhere above Aisle 47, watching the hot dogs.

Aisle 47 is marked by a sign as big as the hood of a Buick—and not a new Enclave, but an old Skylark. “Aisle 47,” the sign hawks, “get your hot dogs, all forty-eight kinds, a whole half-acre of them. All-beef, spicy, spiral, cheese-stuffed, jalapeño-cheese-stuffed, thick, thin, fat, low-fat, chicken, wild rice, kosher, and, in the summer, blueberry.” (Which must have been a mistake, or the idea of an intern, or maybe the owner’s nephew.)

Aisle 47 hums with options. And electricity.

“Get your bratwurst—wait, bratwurst and sausages are in Aisle 48, under a different sign, so never mind. But hot dogs, though. A barracks for hot dogs. HOT DOGS,” the sign shouts.

That Aisle 47 billboard is hung from the celestial ceiling, perfectly straight, by the guy in the hydraulic lift who hung the other sixty-eight signs before the Grand Opening. It’s hung with steel cable, the kind approved by an engineer hired by corporate, or hired by the consulting firm hired by corporate, just like in the other supermarket, Store #13, the suburb over, or the mid-sized town over. The other store with the same white trusses, and, oddly, maybe another St. Peter, probably union, also watching hot dogs, in a different but similar and same Aisle 47.

In those Aisle 47s the same packages of hot dogs, in the same arrangement, with the same dutiful attention to detail—from “Stocking Orders, Week of January 10th” on a clipboard by the manager’s office—await their orders to jump into your carts. These are the same carts, but depending on the store and the suburb, they have different realtors’ faces on the black plastic signs in the wire kids’ seats. These are the same carts that get wheeled into the same-sized parking lots, with the same cart corrals, in the same spaces, the same distances from the doors from the stadiums. I mean stores.

This barely resembles a small-town grocery store. Grocery stores are like the concession stands at the stadium, where there is one kind of hot dog. Maybe two, and the other’s on special, as noted by the hand-markered sign, not the one hung perfectly from the cloud-high ceiling in the supermarket, or even the dingy, nine-foot ceiling in the grocery store, but the one cut out of yellow tagboard and trimmed with red Sharpie, probably by the owner’s son, Jeff, who’s a grade older than you. And not hung with steel cable, but taped to the shelf. This super-formal special, nowhere on any manager’s clipboard, is not in Aisle 47, but in the back aisle—not the front aisle, or the middle aisle, but the back one, the one with everything that is cold, hot dog or not, in a cluster of three little deli cases. Two kinds of hot dogs living with one kind of ham and one kind of butter and milk and cheese, a tiny commune of cold.

In the back aisle, where the deli cases’ compressors make the lights dim, much of the perishable has perished, and caveat emptor translates to empty carts. You watch those expiration dates: Jeff isn’t as diligent as his old man, especially since he started going with that Larson girl. Even the canned goods can be suspect: last year you picked up a can of cream of mushroom soup that looked like it belonged in a museum.

But at least it was on special.

The grocery store has six or seven carts, with no cart corrals, in part because there is no parking lot, but mainly because the carts never leave the store, because Cheryl carries your bags to your car. The cart would be worthless, anyway, because it can’t jump the curb onto the street, diving between diagonally-parked pickups, loaded from the back. The cart can’t jump the curb and go back into the store, either, through the single door that is not-so-automatic, at least unless Cheryl sees you coming and opens it. Besides, from that door to your pickup is, what, twenty feet?

And if you had to buy 1%, you’d definitely want to talk to the manager.

The dairy manager, of course.

At the grocery store, you’re pretty sure there’ll be milk at all. Pretty sure. Unless the blizzard’s coming, or the Boy Scout troop just came through to stock up for the pancake breakfast. Which is why you subscribe to the local paper, to keep an eye on such things.

At the grocery store, you get that hit of whatever neurotransmitter fired in our primate ancestors’ brains when they found the bush of blueberries, or even not-so-blueberries (YES! 1% milk!). You get that glee of the kid in the candy store. Which is half-accurate, as the candy is eight feet, not eight aisles, away.

At the grocery store, the concept of “the good kind” does not exist, at least unless the owner/manager/cashier—Johnny, Jeff’s dad—could get them cheap. (And then, be sure to watch the date.) At the grocery store, “the good kind” has a different definition: it’s good that this kind is, you know, here in the store, and not on a truck somewhere else, which would be bad. Sure, maybe some of the kinds taste better than others, I guess. (YES!)

At the supermarket, “the good kind” most certainly exists. It has to: it’s the lone criterion for deciding. All the kinds, the shelves full of kinds, the 47 Aisles of kinds—they’re not choices. They’re not even options, really. They’re consolation prizes. Chaff to be sorted through as you hunt for “the good kind” of…whatever. All the options besides “the good kind” are the hunter-gatherer equivalent of bushes and bushes of green blueberries. Or, more accurately, the not-so-perfect-blue blueberries. But they could just as well be green. Dark green. Or rotten. The other options are just shelves and shelves of disappointment. “They didn’t have the right milk.” Sigh.

As if you even know who “they” are, names unknown. “They” aren’t Johnny.

The people who know Johnny do go to the supermarket sometimes, like when they go to the city, or small city, maybe for a doctor’s appointment. And those people are confused. And literally, spatially lost. Which “kind” to buy? (Umm…I guess this one is cheapest?) The store brand is no longer okay, though, with the fancy packaging next to it eye-ing you down, convincing you that you’re settling. Gone is the YES! when they had 1% milk—here is the UMMM… when they have five brands.

The one at eye-level, I guess?

And being at the supermarket meant you were in a rush, because you always shopped for groceries at the end of the trip, and you still had an hour home. And you had to bring coolers for the perishables, none of which had perished, because the expiration dates were all sometime in the future, the flying-car future, or something, because the stock boy, name unknown, did a much better job than Jeff, or because the stock boy could barely keep it on the shelves long enough for it to expire, or because the supermarket got three trucks a week, not one once in a while.

You were forced to pick from among all these kinds, which is a departure from picking “the kind,” all while you were rushed to get home before the ice cream melted, which you bought because the supermarket did indeed have “the good kind.”

And you feel tired, somehow. And not because you had to walk a half-mile to your car in the massive parking lot, pushing your cart through the snow, either.

Just the shopping was a different kind of tiring, with all the deciding among the kinds, the constant preferring, the arbitrary, forced opinions about kinds that all were fine, at least if you didn’t know they weren’t. The snap-judgment choosing, making a primate brain that was excited that there were blueberries at all pick between blueberries that were different shades of the same shade of blue. The small-town primate’s Boolean algorithm of “YES!” or “empty” does not accommodate variables like “kind” or “favorite” or “better,” or even “good.”

The female, suburban primate, though, with her “favorites” and “kinds” and whizzing the cart from pre-determined point to pre-determined point from aisle to aisle, somehow knew how to navigate the bushes to find the right shade of blueberry. Her husband just wandered behind, dazed, seeing just blueberries, or maybe just the leaves of the bushes, baffled. Like a chimp following Sherwin Williams in a paint store. Blindfolded.

“I’m going to the grocery store!”

My wife lies to me.