The Rivals That Never Play 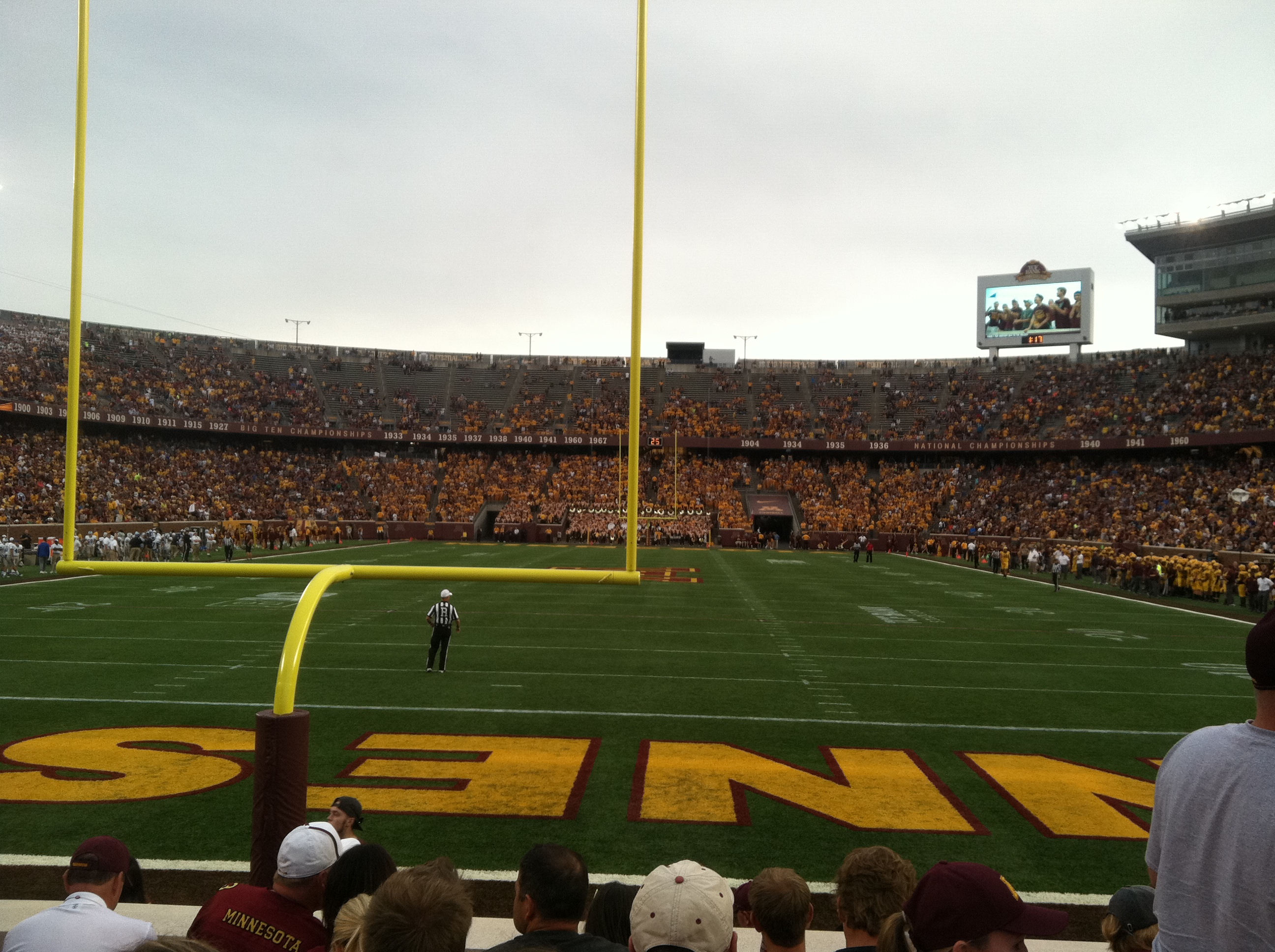 Professional and college football teams do not compete on the field, but they do compete at the state capitol. Just ask the taxpayers of Minnesota, who recently agreed to pay for two brand new football stadiums. The stadiums sit just two miles apart, on the east and west banks of the Mississippi River. One of the stadiums is too small. In this competition, an NFL team won, and a university lost.

In 2009 the University of Minnesota opened its new football stadium with hopes of reenergizing its fan base. Fans were indeed excited that football was back on campus–for decades, “home games” had been across the Mississippi River, in the HHH Metrodome in downtown Minneapolis. During that time away from campus, Gopher football had sunk into irrelevance, both nationally and in the Big Ten Conference. Attendance had dropped drastically. The new stadium harkened back to the program’s glory days in the middle of the last century, which included six national championships and ten conference championships. Those championship teams had played at Memorial Stadium, which used to sit just two blocks away from where the new stadium was built.

The new stadium did not come cheap. Its $288-million cost was partly offset by a financial institution, leading to the nickname “The Bank.” Ironically, despite its hefty price tag, The Bank was actually smaller than both the Metrodome and Memorial Stadium. The grand homecoming of Gopher football, hundreds of millions of dollars in the making, amounted to the university’s smallest home stadium since before the Great Depression.

In addition to being dwarfed by its predecessors, the new stadium was dwarfed by its competitors. The University of Minnesota, one of the biggest schools in the Big Ten Conference, chose to build the conference’s third-smallest football stadium. Only Northwestern University, a relatively small private school not known for its football tradition, and Indiana University, a “basketball school” in a quintessential university town, had smaller home venues, and not by much. Three of Minnesota’s conference foes (i.e. Michigan, Ohio State, and Penn State) played in front of crowds over twice as big.

How could the University of Minnesota–one of the nation’s largest universities, a land-grant institution in a major metropolitan area, and winner of a half-dozen national championships–build such a small stadium? Part of the answer is that the Gophers play literally across the river from a professional team.

1961 was also the year that the Vikings came to town. A half-century and two stadiums later, the Gophers’ attendance has not recovered. And thanks to two Minnesota blizzards—the first one of snow, the second of public outcry—it won’t recover anytime soon.

In December 2010, only a year after The Bank opened, the Metrodome’s Teflon roof collapsed under the weight of an extraordinarily heavy snowfall. Viral video of the roof’s failure, taken from inside the stadium in real time, gave the Minnesota public an iconic image of the collapse, serving to confirm fears that The Dome was obsolete. The Vikings’ next home game, a nationally televised broadcast, was hastily moved to The Bank at the university across the river. Media coverage focused on the sudden change in venue: On a dark winter night, the Vikings would play not on their cozy indoor field, but instead on a tundra that had been underneath feet of snow only days earlier. (Hundreds of volunteers had helped shovel truckload after truckload of snow out of the stadium, which was quickly dubbed “The Snow Bank.”) Even more chilling, unlike many outdoor stadiums at northern latitudes, The Bank had no field-level heat, in no small part because home games in college football are scheduled only into November. The recently snow-covered field was frozen, and some of the NFL players complained about the conditions. The state, as well as the nation, heard them.

Within eighteen months of the collapse, and amidst speculation that the Vikings might relocate to a warmer climate, the Minnesota legislature approved funding for another new football stadium. The Vikings had repeatedly asked the legislature for a new stadium for over a decade, but legislators had passed in deference to the Gophers. Now, though, the time had come for the Vikings’ stadium. The state’s approval came six years after the decision to fund the stadium at the university, and less than three years after the university’s stadium opened. During construction of the new stadium, the Vikings would play home games at the university. They quickly installed heating coils beneath the field.

The Vikings’ new stadium was over twice as expensive as the Gophers’ horseshoe. Just the taxpayers’ share of the “public/private partnership” would dwarf not only the price tag of the stadium on campus, but the would-be price tag of a fully expanded stadium on campus. The university’s stadium had been built with expansion in mind, including footings to enable the addition of 30,000 seats in just one offseason. The resulting capacity would be 80,000, positioning Minnesota in the top half of stadium size among Big Ten schools, directly behind archrival Wisconsin. The Gophers had been poised to quickly climb in the stadium rankings, but they would have to stay in their hole.

As a result of these two blizzards, the university’s football stadium would become the smaller and cheaper of two brand-new, tax-supported football stadiums within two miles. Also, because the state had just footed the bill for a second stadium, the Gophers had little chance for expansion. Of course, attendance at Gopher games was not big enough to warrant expansion, anyway. That attendance had been low for a half century–since the Vikings came to town.

Minnesota’s case sheds light on a nationwide trend: College football programs near NFL teams build smaller stadiums and attract fewer fans. In 2010, thirteen of the nation’s fifty-eight major college football programs played in metropolitan areas with NFL teams. Eleven of these thirteen NFL-market college teams—over eighty percent—were in the bottom half of the college attendance rankings (see figure). Even after statistical consideration of other factors like school enrollment and success of the football program, NFL-market college programs drew about 13,000 fewer fans per game than their competitors in non-NFL markets.* Broader studies in the academic literature report similar losses in attendance. In general, fewer people go to college football games if a professional team is nearby.

It should be noted that the college football program with the highest attendance, the University of Michigan, is indeed in an NFL market, but its circumstances are exceptional. Michigan is the all-time winningest team in college football history, and its neighboring NFL team, the Detroit Lions, has among the worst winning percentages in league history. Also, for an NFL-market program, Michigan’s campus in Ann Arbor is relatively far from the Lions’ stadium; consider that other schools, like Miami and Minnesota, actually share or have shared home stadiums with neighboring NFL teams.

This decrease in attendance at college games reflects the fact that NFL-market college teams build small stadiums, but that is only part of the story. Indeed, college stadiums in NFL markets hold about 10,000 fewer seats than venues away from professional franchises. The seats in those smaller stadiums, though, are also more likely to be empty. On average, about 6% of seats in non-NFL markets go unused during the season, but over double that number, 15%, go unused if an NFL team is nearby. That is, fewer people go to college football games near professional teams, but not merely because the stadiums are smaller–those small stadiums near the NFL are actually emptier than the big stadiums farther from the NFL. Nearby NFL franchises apparently compete with local universities for football fans, and the universities routinely lose.

Minnesota’s lone major university lost because the state built two stadiums instead of one. Indeed, all of the seats in Minnesota’s two new stadiums could almost fit into the largest stadium in the Big Ten Conference: The Gophers’ (50,000) and the Vikings’ (66,000) stadiums total 116,000 seats, while Michigan Stadium held 109,901 when The Bank opened. When the Gophers play away games in front of over 100,000 screaming fans in Michigan, Pennsylvania, and Ohio, they will remember that the taxpayers of Minnesota, instead of expanding a single, shared stadium, built a second stadium for its professional team’s exclusive use. Those taxpayers lost, too: Compared to the cost of a single, expanded stadium, they paid triple.

The University of Minnesota used to be a perennial contender for the national title trophy. In the last half-century, though, they’ve had to settle for smaller trophies, the kind often given in college football’s history-laden rivalry games. They play for Floyd of Rosedale, a bronze pig, against Iowa. The Little Brown Jug, a decorated water bottle, goes to the winner of their game with Michigan. Paul Bunyan’s Axe is at stake against Wisconsin. But over this period of small trophies and national irrelevance, their greatest rival hasn’t been Iowa, or Michigan, or even Wisconsin. This rival hasn’t been in the Big Ten Conference or even on the schedule. But it has invaded their stadium. After all, the word rival derives from the word river. When the fans wearing maroon and gold file into their undersized stadium, they will look out the horseshoe at their true rivals: the Vikings in the new stadium across the river.

*Note: The number of 13,000 fans is the result of a linear-regression model. Despite having only three independent variables (i.e. enrollment, all-time winning percentage, and sharing a metropolitan area with an NFL team), the model produces an R2 value of 0.78, meaning that seventy-eight percent of the variation among schools’ attendance is explained by just these three factors.