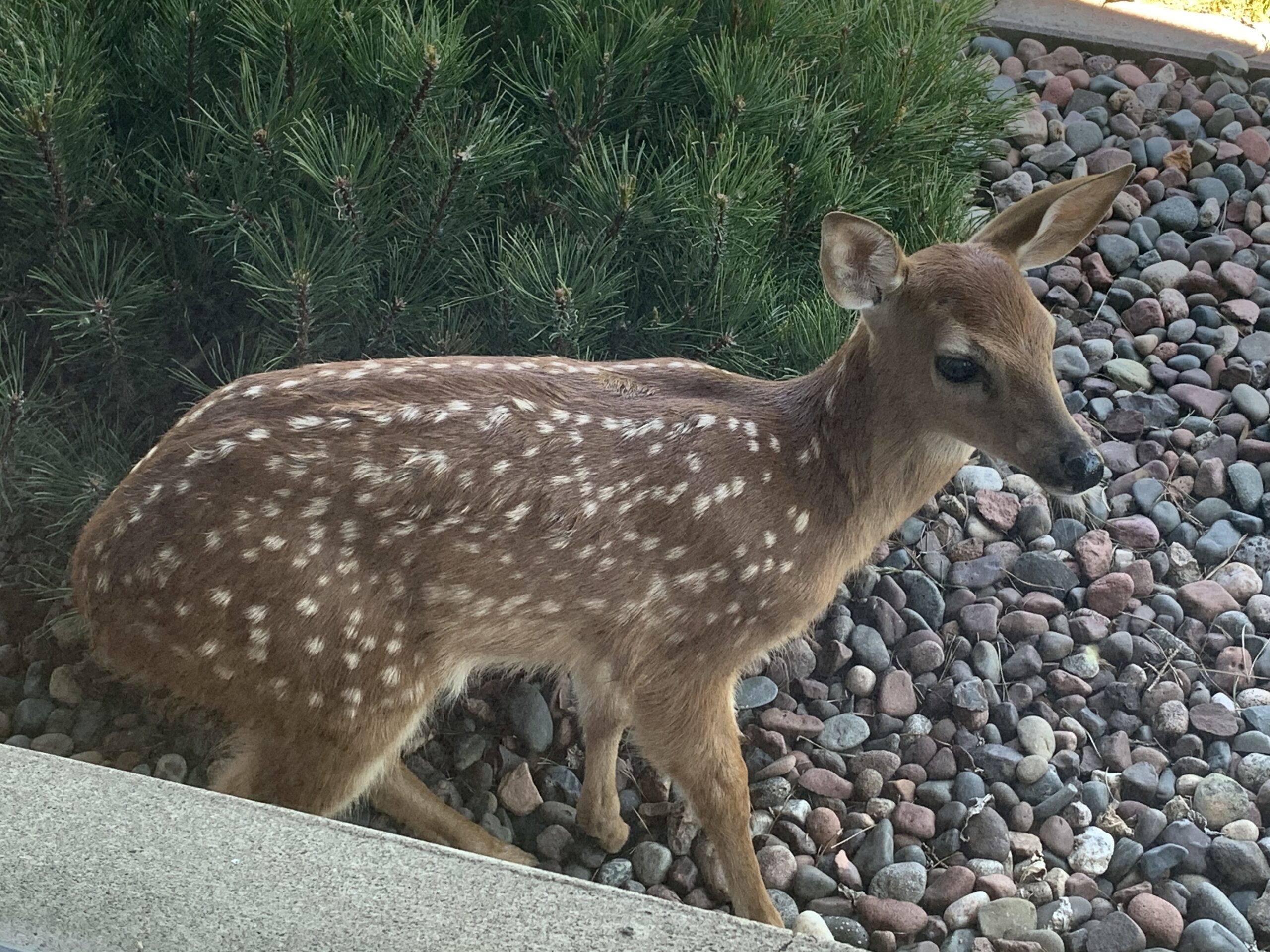 My captor is a fawn, young enough to have spots. It waits, watching sentinel over my backyard, nosing itself and panting in the sun, then lounging in the shade as the afternoon rotates around it. It waits diligently, probably just as Mother said, or stomped, or whatever does do, until she returns.

Or, until some jackass shows up with a rip-roaring lawn mower, trying to hack his grass into a semblance of a prairie in the Northwoods, one little outpost regained in the Battle of Mosquito Ridge, a la the War on Nature. In which he is a foot soldier, booted in cracked, perfused-green old running shoes with remnant padding like a hardtack pancake that’s been sitting in the sun, that relentless blazer also responsible for this tropic of skin cancer that he hopes to machete with a six-horse Briggs and a cloud of blue smoke. And also exhaust from the mower.

But no smoke plumes while the fawn hides in plain sight. The city, this micropolitan hub of this hunk of the Northland, is no place to send a fawn ambling without Mom, not with four lanes of camper traffic nearby, where canoes obstruct views and the parents in the front seat cajole the candy from the last stop before The Woods starts, Where the Interstate Ends, which sounds like the title of a parody book of kids’ poetry. No, don’t scare a spotted, doe-eyed fawn into a real-life game of Frogger with the city types who are settling in with their Big Gulps, and with bigger campers goosenecked into their pickup boxes with bike-handle streamers whipping in the impatient winds of the nascent but ever-passing weekend. I don’t have much of a desire to sample venison veal, especially this early in the season. But I suppose I could grill it in my newly mowed backyard, which would be nice.

What a stupid place to set a fawn down, Mom: in a bed of rock, behind a little bush, inches from a wall. Where it has sat for days, less sniper and more billboard, advertising its presence for all to see and not hear, waiting for good doe. A brown beacon. Last year, at least Mother had the good sense to hide Brown Baby in the ferns by the fence, which I didn’t realize until I got too close with the mower and got shocked by a flash of brown lightning, and the deer jumped out, too. After that felony cardiac arrest, deer and lawn-care warrior kept their distance from each other for a while, until the not-so-neon “no” burned out of the fern’s “vacancy” sign, at which point I quickly did a little housekeeping with a weedwhacker and re-fernished the accommodations into a minty mash, like a botany bomb warding off other interlopers—a lusher Chernobyl with flecks of vascular plant clinging to white vinyl.

So maybe it’s my own fault: no more ferns by the fence this year, so now a fawn by the wall, and I’m pinned by my own sense of guilt about unleashing a spotty wobbler into oncoming traffic. This would have been handled differently at Home, no doubt, with the woods within spitting distance and a quick “Git” to get things moving. After all, a Mother Dearest that sets its little panter into someone’s landscaping instead of the acres and acres of old-growth forest just yards away would be a well-vetted candidate for semi-natural selection, one would think. Not so much in a micropolitan area, though, as the deer here are easily more tame and conditioned to humans than at least half of the cubs in my son’s Scout pack, feral creatures themselves. No, city deer wander up to you, stare at you blankly, chewing, unafraid, or unaware of the high-speed lead therapy that might become of their docility. These are the animal kingdom’s city slickers, these deer, a metaphor for us all, long out of the jungle, wrestling to the forest floor the flashes in our minds of primal pasts long gone, supplanted by thoughts of convenience and regulation: why kill this deer in my backyard for meat when it’d be a lot of work to clean it, and would probably make a mess of the snow—damning evidence when someone called the cops because they heard the gunshot? There are permits for these things, I’m sure, with Fat Suzy shuffling them between her not-so-lean-venison-sausage fingers back at City Hall after you e-file on YourFriendlyGovernment.gov, a process made necessary by the inevitable removal from nature that the concrete jungle represents. And have a nice day, they say, the kings of that concrete jungle who become a real pain when, you know, the real nature clippity-clops its way among the manicured trees.

Like the raccoon that I cannot legally shoot because, you know, love thy neighbor and Nature, I’m not sure in what order, or perhaps because of whatever union represents the people in new, white, city-seal-emblazoned pickups whose job it is to rescue us helpless townspeople from fuzzy vermin that can be stopped dead with .22 shell, as if they were Raccoon-zilla terrorizing the village, though this particular village seems increasingly like Tokyo these days, and this raccoon is especially large, the consequence of a city-garbage diet, no doubt. These white-pickup cowboys in their khaki uniforms seem to prefer to keep it in their holster, though, and instead play rodeo clown after trapping the little ‘zilla with cat food, and probably transport it to a lovely city park, maybe after a spa-kennel-bath-weekend, all on the taxpayers’ dime, of course. Which back home would be even more ridiculous, and much more easily solved: decomposing garbage is the easiest kind to put into the woods, or the river. As a bonus to this return-to-nature method of disposal, maybe a Scout would find the skull while doing his environmental science merit badge, or maybe a canoer would find it on the river bank, that is if people dared enter the herbicide-infested drainage water called The River back home—many fewer goosenecked trailers heading that direction come Blessed Weekend, no doubt.

So, no, instead of cutting my grass I become an overly conscientious objector and enter a days-long stare-down contest with my fawning friend, blinking stupidly as it lays his head in my rock. (Who is blinking stupidly? Both of us.) He knows he’s hit the motherlode as he waits for his mom: he found a resting spot in the backyard of yuppie-hippie-yippie who doesn’t want to see it die in traffic, at which point I am reduced to a blithering member of PETA or the Sierra Club who refuses to scare a deer or swat a mosquito, because Nature, because Animals Are People, Too. Or some shit.

Which is a lie, especially the part about the mosquitoes, because an unmowed backyard in this country will end up biting you in the ass, kinda literally, or sending you up the West Nile. So, dammit, I cracked a PBR and bit my lip and fired up the mower and made a round by the rocks and the deer ambled away—less brown lightning this time, on both ends—and I went on my oh-so-merry way, sweating and looking down at the seconds-old buzz cut to ponder how long I could go without having to sharpen this stupid thing again, my mind no longer occupied with the strife of the spotted comrade in harm’s way. And the little deer apparently survived, as I saw something identically nonchalant and spotted with a similarly obviously stupid mother gambling across the highway an evening or so later. I hadn’t given the deer enough credit, apparently. Perhaps it was hubristic to think I needed to give credit at all, or could at all.

Which is maybe the point, that Nature is a fun concept to hold holy as long as you don’t actually interact with it, at least in a way that matters. If it’s a cute fawn in your rocks and the choice is between letting it sit there all cute and letting it get burgerized by the grill of an F-250 off to Camperland, you let it sit and you consider yourself all Nature-Loving, probably while wearing some tech-kinda-fabric pants from Eddie Bauer or Patagonia. And sipping fair-trade coffee. The second your kid gets red-peppered with mosquito bites, though, you’re yanking that pull string and letting the turf bits fly, cute little brown friend be damned to a hood ornament. That probably says a lot about how a lot of us think of Nature: we all love going to the Wolf Center and supporting wolves’ inclusion on the Endangered Species List, and join a Facebook group, at least until we see how unendangered those bastards seem to be by killing our livestock en masse, etc. Which is probably why the Save the Wolf rallies in Montana seem to center on the college towns, not in range country, where people live not in dorms, but in and among Nature itself.

Alas, because I have no livestock and for years haven’t even been into a barn that didn’t have newly awarded ribbons flapping in the fan breeze over fresh straw, Nature is at arm’s length for me, too, just off the hiking trail, a place I don’t care to venture because, you know, ticks and stuff. So when I’m confronted with the ferocity of Nature in the form of this yawning fawn, it makes for a not-so-epic tale of man’s dominion over nature and human nature and the not-exactly-Hundred-Acre Wood, to be sure. But this tale will have a sequel, no doubt, so long as the deer that thinks that a dryer vent makes for a nice feature in her fawn’s hiding spot doesn’t die on the highway or drown in the shallow end of the gene pool. Next year, though, whether by way of reluctant resignation to coexistence or maybe one of those in-city archery permits, I’ll be ready, and maybe waiting, for my deer friend, and all he represents.

Or, maybe I’ll go plant some ferns by the fence.