A Cashless Society? Not Out Here. 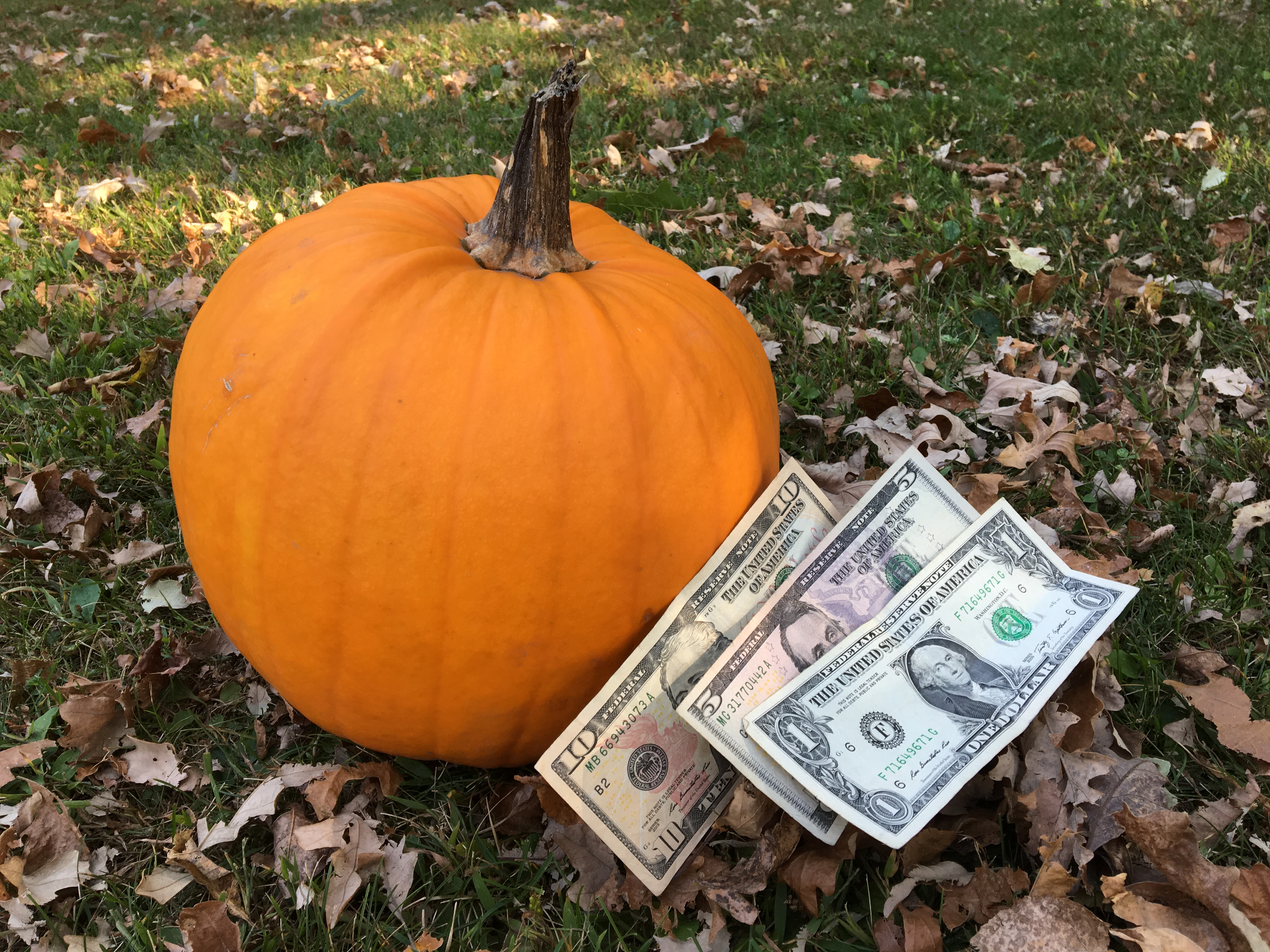 She trudged in the wet gravel, down the long driveway, in her shiny red galoshes. The dull red wagon rolled behind her, pressing tracks through the mud, its load of orange pumpkins quivering. The little ones bounced.

As she approached the highway, she started to peek at the makeshift table, a half-sheet of plywood over two sawhorses. The other half of the sheet, dull gray from years of use, was leaned against a tree, spray-painted in black: “Pumpkins 4 Sale.” On the other side, the tree side, was her brother’s first attempt, “Pumkins 4 Sale,” made years earlier, still ridiculed years later, usually followed by some form of hair-pulling.

One, two pumpkins were gone from the table. Her pace quickened as she neared, her galoshes squelching longer, her boots sinking deeper, the wagon rattling manically. Two pumpkins—six dollars, her mind raced. She slid to the table and opened the money box. Twenty-six dollars: nineteen for the change, six for the pumpkins—one of the little ones, one dollar each, must be gone, too.

The arithmetic relied on the honesty of locals who stopped on their way from town, or strangers who stopped on their way back to the city from the lake. Business was better than last year—better than any year her brother ever had—which worked out, because the lumberyard just slashed the price on the last girls’ bike from summer to make way for snowblowers, and she was only a day or two of pumpkins from getting those bright white tires dirty in the driveway.

She moved the morning’s harvest from the wagon to the table and pocketed the money, into a tiny front jeans pocket. The bills, folded in half twice, barely fit. Back onto the driveway her boots squelched; the wagon, free from its load, hardly made tracks as it followed her, a clanging steel puppy with a black pole leash.

In town that same morning, a boy pushed another noisy, four-wheeled piece of steel, but with an engine; both he and it were spewing blue smoke. The fall rain last night—the good-for-nothing rain, the rain that made farmers worry, footballs slippery, cheerleaders whiny, and lawn mowers angry—left the grass and leaves like wet salad. The normally crisp brown litter of autumn, good for leaf piles and decorative lawn sacks, was now just limp, saggy compost strewn across the yard. On he pushed, literally, the wheels leaving deep tracks in the slick, dark grass. He leaned, fully extended, willing his weight against the steel, in a constant Superman pose, feet slipping from under him, arms shaking, his head down, looking up only when the mower slowed, when the thick cellulose slaw plugged the chute. Exasperated, he would throw up his hands, killing the mower—if only—and detach the bag with a groan, lifting the sack of silage, reaching his green hand into the chute, pulling a Swamp Thing of an appendage back out, covered with grass stew. He was now slimed, a half Hulk, ninety-pound-weakling version.

After bagging the autumn bayou, he would approach the house, where Mrs. Gunderson would stand, approvingly, holding a crisp ten-dollar bill that she had gotten special at the bank—“Crisp, now, for the boy, please”—which he politely grabbed with that same green hand, now slightly less green after wiping it on his soaked jeans, but still manicured with mulch. Because the yard had taken so long, he wanted to ask for more than ten, but as a consolation, he wouldn’t have time for Mountain Dew and muffins, like usual, when he sat with Myrtle the Turtle, shuffling around her tiny, stuffy house, while the summer heat blazed outside of doily-curtained windows. Not today. He was off to the lumberyard for a new bike, now ten dollars cheaper, and this might be the last weekend when he could leave long, black skid marks on the driveway before the snow flew.

Instead, I imagine that there might have been a lot of time on concrete, or on playgrounds with newly laid wood chips, surrounded by chain link. That is to say in a city, perhaps not working. In the city, see, work sometimes has to wait until “working age,” meaning when the law allows you to work, a concept that means a lot less in small towns. And that author’s first “working-age” job might have indeed been menial, but might have been at, say, a fast-food restaurant—nonexistent in tiny towns—wearing a uniform, working for someone else, and where Day One might have been spent learning how to work the credit-card machine.

When someone writes about a cashless economy, I immediately picture a guy with a stylish, tiny wallet who buys coffee with a credit card, probably at a drive-through, probably with a straw in it. Or a woman wearing heels who can’t carry a lot of cash because it just won’t fit into her little purse, let alone her optical illusion of a pants pocket.

Kind of like the girl with the wagon, but not at all.

These (admittedly imaginary) people don’t buy pumpkins at unmanned stands next to long driveways with wagon tracks. They buy them on their way out of the grocery stores, or food coops, probably. With credit cards. And then they put them into their stylish crossover SUVs and then onto their oh-so-lovely condo balconies, or something.

When the pumpkins start to wither, or when they no longer serve as darling seasonal decor, these (admittedly imaginary) people wrap the orange orbs in plastic bags (that they got, you know, somewhere—not that they use them very often, of course) and nicely put them down the garbage chute for someone else to take away.

At the little girl’s house, her brother hits them with a shovel, and then throws them into the woods.

And these (admittedly imaginary) people don’t pay neighbor kids to cut their grass at all, let alone with ten-dollar bills. They have people for jobs like that, and they pay their bills online, or through their HOA fees.

Unfair snap judgments and mental images aside, though, the narrow point here is that rural culture includes cash. Demands it, kind of. Cash allows small transactions with people you know, often face-to-face (end-of-driveway pumpkin stands excepted). This kind of commerce builds a certain kind of culture. Perhaps unsurprisingly, people from that culture tend to view business, generally speaking, differently than other people, the kind of people who advocate cashless economies.

The idea of a cashless economy must have come from somewhere else, somewhere where credit cards are ubiquitous, where everyone handles them, and where fewer kids work under the radar of the IRS. Maybe cashless economies can make sense in fancy, futuristic stores in cities, where check-out happens automatically on your way out of the store, with scanners quickly recognizing what you bought, calculating how much it costs, and deducting that amount from your Magic Account in the Sky.

Then, if you can’t pay, maybe laser beams blow out your tires in the parking lot, or something. Or storefront-mounted lasers melt the tires on your fixed-wheel bike.

It’s okay—you can take the bus.

But out here, the wheels of commerce are greased with cash. Cash keeps the focus of business where it belongs: between neighbors, or at least between acquaintances, where no one needs to sign on a slip of paper to make sure it’s real. At the pumpkin stand, no one checks ID, or checks the signature on the back of a plastic card. Myrtle doesn’t come out on the front porch waving American Express.

Maybe attitudes toward cash speak to how city people view business, as if it’s merely a series of transactions monitored by large, faceless credit-card companies, where the all-knowing chip reader is king, and where both customer and proprietor are pawns. In small towns, though, it’s easier to see how commerce is a set of transactions between actual people, because there’s a higher probability that the people doing business, especially retail business, know each other.

Maybe attitudes toward cash speak to how city people view taxation, too, as if the government is merely another faceless entity monitoring business. When a transaction occurs between two strangers, and when a credit-card company is already intervening and taking three percent off the top, maybe it’s a small step for another entity, the government, to grab a seat to the show and take another few percent for its trouble.

But that few percent isn’t worth the trouble. One of the arguments for a cashless economy is the ability to track payments, often for taxation. I get it—the winds of commerce can turn the turbine that powers the government. But pumpkin stands are not the winds of commerce—they’re more like the breeze a kid feels riding her new bike, getting her white tires dirty. It’s small potatoes—or gourds, anyway. To suggest that we should try to track all trade, even at the ends of driveways and on front lawns, sacrifices something bigger. It’s the wrong track.

And these kinds of tracks lead to cash.

Don’t go after cash. Small-town life—money boxes left at the ends of driveways, the Myrtles of the world waving ten-dollar bills on the front porch—depends on it. As we look in the mirror, we might see that we depend on cash, too.

No matter where we buy our pumpkins.