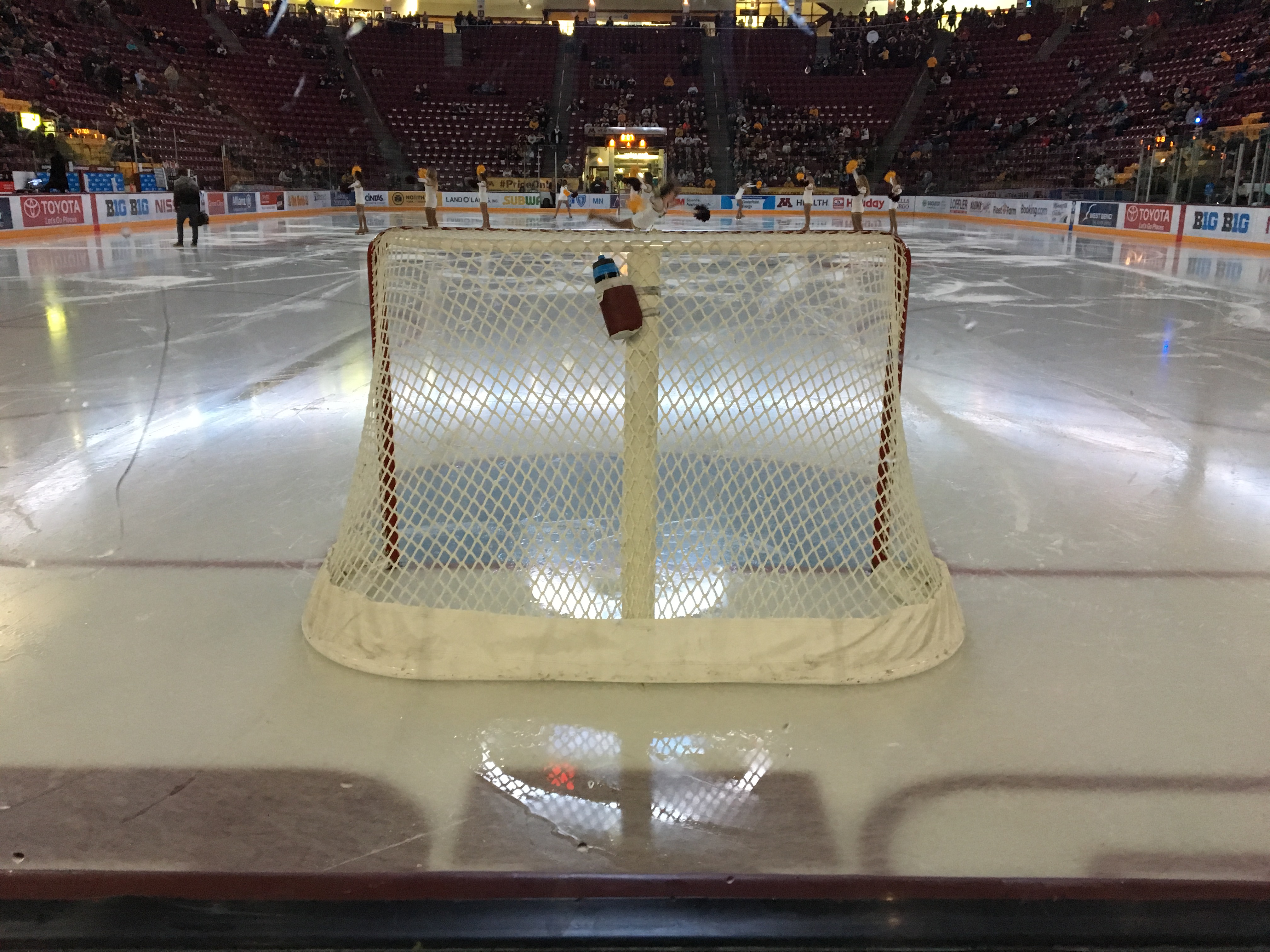 In college sports, when is it okay to take your ball—or puck—and go home?

A couple of months ago, a group of small, private colleges in Minnesota decided to boot a school from their athletic conference, the MIAC. The University of St. Thomas was a founding member of the conference, but over recent decades its enrollment had grown to about double the conference’s next largest school. UST’s spending within its athletic department, especially for football, followed the same arc. After years of watching St. Thomas dominate the conference in many sports, including routine blowouts on the football field, the rest of the schools in the MIAC forced the Tommies to find a new conference.

The gnashing of teeth was immediate. The dominant story in the news media—including a breathless feature piece by a national sports journalist—was that the other MIAC schools were simply sick of losing, and ousted St. Thomas so they could win again. The obvious implication, sometimes made explicit, was that the rest of the schools should “suck it up” and “deal with it.” After all, that’s just sports. One sports writer in the state called the MIAC “a joke” on social media.

Contrast this with another recent development, this time in college hockey. The history of conference realignment in major college hockey is not simple, but here’s a summary: for historical reasons, hockey conferences are typically different than traditional conferences—schools that play each other in hockey often don’t play each other in other sports. One of those traditional conferences (the Big Ten) recently decided to include hockey as a sport, and pulled its members from two existing hockey conferences. The remaining hockey schools shuffled their conference alignments.

Of those realigned conferences, the WCHA could be considered the “leftovers”: it soaked up the Midwest schools that didn’t find other homes. Well, at least most of the schools were in the Midwest: three of the ten were in Alaska and Alabama. And last Friday, the other seven schools in the WCHA—the “runaway seven,” all from Michigan, Minnesota, and Ohio—announced that they planned to form their own conference.

Again, the gnashing of teeth was immediate, but for different reasons than for the MIAC scenario. This time, the focus was on the schools that were left behind. The two Alaska schools and Alabama-Huntsville, the story goes, are now “in peril.” To be sure, these three schools are perennial bottom-dwellers in the standings, and each has struggled merely to operate its hockey program, either currently or recently. (The fact that the announcement was made on a Friday afternoon seemed to fuel the sports media’s ire—apparently timing a “news dump” in this way is meta-messaging for cowardice, and to do so is shameful.) Regardless, these schools may have nowhere else to go, which fueled some sympathy for them and some disdain for the schools that decided to leave.

In talking about the MIAC and the WCHA, we’ve made a key mistake: we categorize both of them as “college sports.” Sure, “college sports” is different than “pro sports” and “prep sports,” but “college sports” doesn’t really exist. In reality, the NCAA runs several parallel associations, or Divisions, that barely resemble each other. The small, private schools in Minnesota play lower-level college sports, in Division III, while the members of the WCHA play the at the top level, in Division I.

This matters. Division-I schools give their players scholarships, often full-ride, to play. Many D-I hockey players, for example, will play professionally, at least at some level. As a result, D-I athletes often focus on athletics, and too often at the expense of their educations. That’s not to say that many D-I athletes aren’t serious students, too, especially in “non-revenue” sports. But in sports where there’s money to be made (i.e. football, men’s basketball, and men’s hockey), top-level athletes often choose to enroll in an institution almost strictly based on the hockey program, and sometimes leave school for professional opportunities immediately after the season is over, regardless of the academic calendar. That’s vanishingly uncommon in D-III athletics.

D-III athletes are also talented and committed to their sports, obviously, but very few of them focus on professional careers as athletes, and none of them are on athletic scholarship (at least in theory). D-III athletics is closer—closer—to the pure, hypothetical model of the student-athlete, one who goes to school to get an education, and decides to round out the college experience by being an athlete. Sure, this broad-brush generalization seems more idyllic than real—I was an administrator at a small college, so I indeed know some of the ugly realities, even at lower levels—but it does paint a contrast with D-I athletics, especially in big-money sports.

So, when a bunch of small, private, Division-III schools see that one of their conference-mates has grown to the size of a Division-II school (somewhat literally, in the case of St. Thomas) and spends money on sports like a D-II school (again, somewhat literally, in the case of St. Thomas), they do indeed have a right to… call foul. This isn’t about “sucking it up”—generally speaking, the focus in D-III is less on winning and more about competing, so a lack of competition becomes especially problematic. (Of course, that doesn’t mean that the players and coaches themselves are any less focused on winning, only that their institutions are.) Small, private, D-III schools often put more emphasis on the first half of “student-athlete,” or at least on the whole hyphenated word.

Especially when we consider the peculiarities of college hockey.

Unlike other college sports, whose national tournament fields are chosen by committees, D-I college hockey chooses its sixteen teams in a strictly arithmetic way, the PairWise. The PairWise is an algorithm based not only on wins and losses, but opponents for those wins and losses, including those opponents’ opponents for their wins and losses. It’s complicated (by perks of winning a conference tournament, for example), but suffice it to say that the teams you choose to play repeatedly—the teams in your conference—can be the difference between making the tournament or staying at home, regardless how good you actually are.

Consider Minnesota State. The Mavericks have dominated the WCHA in recent years, and perennially have one of the best records in college hockey. Why, then, are they typically only in the top five of the PairWise, and not at the top? Because they have played in a relatively weak conference, and the PairWise is brutally numbers-based. The fact that Minnesota State is among the teams that are leaving the WCHA—or, are leaving behind the Alaska schools and Alabama-Huntsville—reflects how the Mavericks have been effectively penalized in the PairWise for playing eight or ten or twelve games against those three struggling programs each year. Had they been in a smaller, more competitive conference, their PairWise rankings probably would have been doubly higher: their average conference opponent would have been better, and having fewer intra-conference games would have equated to more games against hand-picked non-conference schools.

Further, to pity the schools that will be left out of the WCHA saga is merely the reverse of what we see in the MIAC saga: just like St. Thomas can move up a Division, the Alaskas and Huntsville can move down. This statement is nearly sacrilegious, of course. The NCAA no longer has Division-II hockey—D-II hockey dissolved decades ago, counterintuitively leaving only Divisions I and III—so “moving down” would mean moving all the way to D-III. Ironically, that would bring them to the level of the MIAC schools, which have their own hockey conference.

(Doubly ironically, now St. Thomas will be looking for a new home for hockey. Some have speculated that they’re a potential eighth team for the seven who left the WCHA…)

But that chasm between Division I and Division III is exactly the point. Unlike the MIAC schools, the Alaskas and Huntsville cannot claim that their poor performance on the ice is irrelevant, or that they are focusing on the student-athlete experience. D-I athletics is, perhaps unfortunately, no place for those arguments: if you play D-I, you play to win. And especially in hockey, with the PairWise, your conference-mates demand as much. As a result, when you don’t win, you really, really lose.

Sure, lots of teams don’t win, but they at least compete, and at least keep their programs running. Nothing against the dedicated players and staffs at the WCHA schools in limbo, of course, but if a D-I program doesn’t win, especially to the point that it has trouble operating its program, and it is on a geographical island to boot, then existential questions start to loom large, and rightly so. To be glib, it’s a brutal manifestation of the phrase “go big, or go home.” Or, perhaps “go big, or go smaller,” which is much less catchy.

Sure, maybe St. Thomas and the remaining WCHA schools deserve empathy, or even pity, but they do so for different reasons, none of them sinister. St. Thomas will simply need to find other mid-sized schools that value athletics, especially football, after years of being a big fish in a small pond. The Alaskas and Huntsville will either land in another lower-level hockey conference, or ask tough questions about keeping their Division-I programs (a situation that is more dire than St. Thomas’s, of course). But either way, St. Thomas is not conference-shopping because the MIAC is “a joke,” and the WCHA’s “runaway seven” were not unreasonably cruel in a Friday news dump. Much to the contrary, actually, in each case.

Overall, our discussions of the MIAC and the WCHA highlight how we forget that the landscape of “college sports” is far from uniform. Sports writers seem to be talking about the MIAC and WCHA sagas, even if separately, without stating the obvious differences. This is a pattern in many of our discussions of college sports generally, which leads to blanket statements in the media about “the NCAA,” whether regarding television contracts, or student-athlete compensation, or educational mission.

In fact, for the overwhelming majority of NCAA institutions, the problems that plague big-time sports are of little concern. Glaring omissions of the differences between Divisions within the NCAA feed confusion and anger about college sports generally, as if all “college sports” can be equated.

They can’t—especially across Divisions. Maybe that makes college sports the ultimate, but least talked about, Division rivalry.